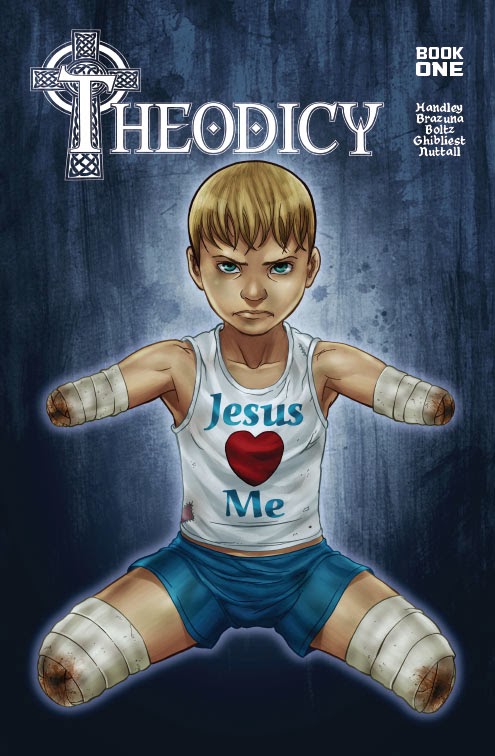 An updated version of Theodicy #1 is now available, for the same low price of FREE!

For a pdf copy, just follow this link: Theodicy #1!

Posted by Screwtape Jenkins at 9:46 AM No comments:

With the recent publication of Theodicy on Comixology, more reviews are starting to roll in.  Have a look:

" It’s just rough and dark enough to take the “sunday school” aspect out of it and almost parody that sort of “Jesus is my best friend!” comic. I REALLY hope they go farther with that and the preview of issue #2 really showed that they are. Call me crazy but I’m interested."

"Though this comic book deals with religious and theological fare, it tackles the subject matter with equal portions of seriousness and humanity's proclivity for error. It yields a very human approach to certain issues, and it brings the issue of doubt in God to the forefront - doubt forged in the furnace of things that happen in the real world, every single day...

... The search for a good comic book is often times as elusive as the search for God, or so it seems to me...Theodicy: Book One is a comic book that I can and do recommend to others."


Posted by Screwtape Jenkins at 1:02 PM No comments:

Do you have a smart phone or a tablet device? Do you live on the planet Earth?

If you answered yes to these questions, then you can now get Theodicy anytime and anywhere!

Theodicy Book One is now available on Comixology!

Book Two will be available there shortly!

If you enjoy the book, be sure to leave a rating!

Posted by Screwtape Jenkins at 9:04 AM No comments:

Finally! Theodicy #2 is now on sale at IndyPlanet!

Now available digitally for only 99 cents!

Miss the first issue? Download it here or at IndyPlanet for FREE!

That's right, young person! TWO issues of Theodicy for only a BUCK!

What are you waiting for?!

Posted by Screwtape Jenkins at 6:37 AM 2 comments:

Why does faith come so much more easily for some than it does for others? Why is it that when some look at the world,   they see one large, persistent miracle, a realm infused with the presence and love of God, while others look at the same world and see a realm of purely material laws and processes?

These will be the issues pondered in Theodicy, a six-issue religious comic mini-series which aims to take belief, and disbelief, equally seriously.

The people of Theodicy live in a world newly flooded with men and women of spectacular abilities that seem to defy the laws of science.  Are these abilities miraculous, sent by Providence to aid the poor and destitute against their oppressors? Or are these abilities purely scientific, a fortunate accident of previous events?

Theodicy will ultimately focus on the stories of two men; one, a priest, the other, an atheist, as they struggle to deal with new experiences that challenge their beliefs, and find themselves unlikely allies in a common struggle.

Posted by Screwtape Jenkins at 3:43 PM No comments:

So, I Wrote This Justice League Movie... Wanna Read It?

I should probably just post the link to the script without further ado, since most people who come here (assuming anyone comes here) won't be interested in the ado and will just skip all the ado. But indulge me for just one or two quick ados.  I realize it's crazy to spend one's time writing a Justice League Movie as a spec script, so I need to explain to you how and why it happened so you don't think I'm crazy.

I hate most superhero movies. Especially the ones everybody else likes.  This drives my eldest brother, who loves all superhero movies, crazy. Over Thanksgiving, I was shooting the poop with him and my other older brother about the prospects of a Justice League Movie.  Those morons were all atwitter with excitement. My opinion, of course, was that it couldn't be done.  Or rather, that it could be done, but not without sucking.

I gave the usual reasons.  Unlike the Marvel heroes, the DC heroes were not all (or mostly all) designed by one man, were never intended to inhabit the same universe, and thus derive from wildly different and mutually inconsistent mythologies and backgrounds that could never co-exist in the same movie.  One was an Alien Schoolboy from deep space who got his powers from the sun. One was a Brooding Crusader (in every sense of that word) who mostly worked the slums of DC's version of Chicago.  One was an Amazon formed out of magic clay on a mystical island full of women.  One was a Speedster who got his powers when he was hit by a bolt of lightning during a laboratory experiment.

You could get away with one of those back stories in a movie.  But trying to build a realistic world with all of them? Impossible.  To complicate matters further, audiences already primarily identify these characters with preexisting movie franchises that were not designed with the other franchises in mind. Try to imagine Christopher Nolan's Batman in the same world as Ryan Reynold's Green Lantern. Those worlds weren't built to work together, so combining them structurally, to say nothing of tonally, would be next to impossible.

My argument drove my eldest brother to distraction. Fed up of indulging me in my favorite pastime of peeing all up in his superhero movie cereal, he issued me a direct challenge: "It's easy to pick apart existing movies or make up excuses why an upcoming movie won't work.  If you're so smart, why don't you write one?  You write movies; write a Justice League movie."

I pointed out all the reasons why such an endeavor, even if possible, would be fruitless.  No one hires unknowns to write movies like that.  And as a spec script, it would be useless.  As the script would feature Warner Bros characters, no one could purchase the script but Warner Bros.  And it would have negligible value as a writing sample, since not only would no one hire an unknown writer to write a Justice League movie, no one would hire an unknown writer to write anything like a Justice League movie.

My eldest bro was unmoved by my excuses. "Whatever. The real reason you're not doing it is because it's easier to criticize something than it is to make something."

I shrugged it off.  But I guess his words actually wormed their way into my subconscious, because about a week later, I woke up at 3 AM with the entire plot of  a Justice League Movie in my head.

That plot included Hawkman as a reluctant emissary for an invading Darkseid (sort of the Silver Surfer to his Galactus), Wonder Woman as an Amazonian brawler who is the unpredictable Hulk-like catalyst of the piece, a budding love triangle between Wonder Woman, Superman, and Lois Lane, Green Lantern making a giant construct of himself to hold together a Daily Planet that's just been cut in half, and various other fun stuff.

And since it was around Christmas, and I had nothing better to do, I wrote it.

Moron that I am, I got the date for Free Comic Book Day wrong! It's actually not March 1, it's May 1!

Mensch that I am, I'm keeping my promise in the previous article's headline.  Theodicy #1 will be free through Free Comic Book Day.  Yeah, through May 1.

So, you got about two months to download it.  That should help you kids on dial-up.


Posted by Screwtape Jenkins at 7:41 AM No comments: